The Best Thanksgiving Ever

My daughter has a sign in her kitchen that reads as follows:

This sign would be hilariously funny except that in Jessi's case, it is absolutely true.  Which is why when she called to tell me she was planning to cook Thanksgiving dinner this year, I readily volunteered to help.

"By the way," I asked a little too late.  "How many people are you expecting?"

"Twenty-seven," she answered.  Twenty-seven? I thought, isn't that beyond the legal limit?  She assured me there was enough room for everyone and that everyone she had invited was family.

I hung up the phone wondering when our family had become so large and remembering a Thanksgiving not that many years earlier when I was home alone.  It must have been in the early 1990's when my son was living abroad and my daughters, both recently married, were spending Thanksgiving with their in-laws.  Although the thought of spending the day alone was daunting, there was something appealing about not having to spend the entire day in the kitchen.

I was waitressing at a deli that year and when I was asked to work breakfast, I agreed.  Because there were no other restaurants open in the area, the restaurant was mobbed, but the customers were generous with their tips.  While I worked, I thought about Thanksgivings past.

As a child, my father always took my mother, my four sisters and me to the fresh poultry shop on Germantown Avenue in Philadelphia to select our turkey from the dozens that roamed freely throughout the store, doing their business on the sawdust-strewn floor.  Just like the Emperor Nero condemning the Christians, my father would point his finger at the biggest one.  Then bird and butcher would disappear through a swinging door through which another, usually bigger, bird would emerge gobbling hysterically. Through the plate glass window, my sisters and I could see feathers flying in every direction.

We were a large family and there was always plenty of company invited to dinner - although I can't remember ever seeing twenty-seven people at our table.

As I continued working, wondering what I was going to do with myself for the rest of the day, I suddenly remembered a television show I had watched earlier that week.

The show was either Hill Street Blues or NYPD Blue.  I can't remember which, although
I am sure the word "blue" was in the title, probably because it mirrored the way I felt exactly.  I had caught only the very end of the show, but from what I did see, I could tell that the storyline had been intense.  As the detectives left the precinct at the end of their shift,  they called out "Happy Thanksgiving" to one another and the room darkened.

The camera followed one of the detectives home to an empty apartment.  With the words "Happy Thanksgiving" still echoing in the background, he turned on the light in his kitchen, removed a turkey TV dinner from his freezer and popped it into the oven.  Or was it a microwave?  Did they even have microwaves in the early Nineties?  Anyway, when it was done, he removed it and ate it with gusto.

I can do that, I thought as I cleaned up my station.  I can do that and maybe a little bit more.  Before I left the restaurant, I stopped at the deli counter and asked for a slice of turkey cut a quarter of an inch thick.  I also picked up a jar of gravy and a small can of cranberry sauce.  At home, I added stuffing and fresh vegetables to the menu.  Then I prepared and ate it slowly. 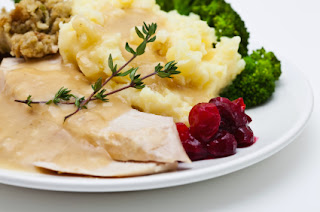 Exhausted from a breakfast that had lasted until well after two, I picked up a book and fell onto the sofa, pulling an afghan on top of myself.  Within minutes, I fell into a deep, satisfying sleep.  By the time I woke up, it was after seven and any thoughts I had about what I should have been doing on Thanksgiving Day were dissipated and I was content.

This year I will not be home alone, however with twenty-six other people to feed, I have the feeling I may be wishing I were.