It Happened One Morning

As I mentioned in an earlier post, I have been taking a course in Mindfulness.  The course, based on the teachings of Jon Kabat-Zinn, is being taught at the Bucks County Community College in Newtown, Pennsylvania.  The building we meet in is called the Orangery, which is located next door to the sixty-room Tyler mansion whose formal gardens lie between the two buildings.
On the first day of class, one of our teachers instructed us to find an object outside as she guided us in meditation.  I had never before done a meditation with my eyes open and I doubted that this would work for me.


It was a brisk but sunny autumn day with a breeze that was gently shaking the leaves from their trees.  A statue of a naked woman stood on the other side of the largest window in the room.  The woman was holding a jar on her shoulder through which a stream of water moved steadily. 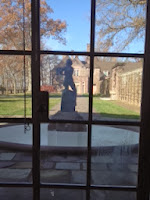 There was a short footpath at the base of the statue and, at the end of the path, was a solitary leaf sitting on the ground.  At first, I expected the leaf to blow away, but it never did.


The leaf was brown and brittle, about the size of my hand and it looked like the letter “C.”  For some reason, it held my interest as the instructor lead us, her voice so low she seemed to be whispering.  I continued staring at that leaf for a full ten minutes or for however long the meditation lasted until suddenly it seemed to become a part of me – a part of my consciousness.
Hours later, when I was no longer anywhere near that leaf, I could still see it, not only with my eyes closed but also with my eyes open.  It was an experience I had only heard about before.  The spiritual teacher, Deepak Chopra, calls it unity.  The Catholic Church calls it communion.  I call it beautiful.

Later, I realized I had experienced a feeling very similar to this one and that it had happened during a moment I write about in my memoir, Rude Awakening, when I fell into a love, which although it has swayed, dipped, spun around curves, evolved and transformed itself, has never ended.