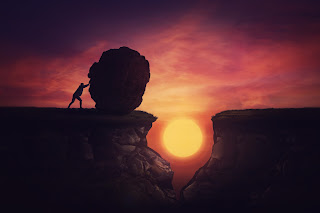 After I wrote my last post (La, La, La) my daughter Cindi, who edits all my posts, said, “It’s all over the place.”

Is she right? I wondered until I read it back and saw she was.

“It’s also fun,” she added, so I published it anyway, all the while wondering, why can’t I write? What’s wrong with me? until doubt – otherwise known as writer’s block - turned to despair.

“Leave it alone and it will come back to you,” a friend told me once when I complained about being unable to write. So, I tried and failed, and tried and failed, until I finally left it alone – for a week, for a month, for months until one day when I picked up something I wrote long ago and thought, I am a writer! And I began, doggedly, to write again. And the block that had become a boulder began ever so slowly to dissipate and, finally, disappeared.