The Last Ever After - Or Not

Is there anything more amazing than the mind of a twelve-year-old?


On her last visit to my house, my granddaughter Chloe and I again stopped to buy books. This time she chose a 600-page book called The Last Ever After by Soman Chainani, a story about two young girls, once friends, who decide to go their separate ways -  at least temporarily.

The other book she chose was Brother’s Keeper by Julia Lee, a story set in set 1950 North Korea, described by one critic as “so intense that, at times, it had me afraid to turn the pages.”

During her week-long visit, Chloe seemed to be reading the two books alternately.

“I didn’t like Brother’s Keeper when I started it,” I heard her tell her mother during a Face Time call, “but now I do.”

“Well, hurry up and finish it while you still like it,” my daughter replied and my granddaughter laughed.

Once she got into it, Chloe, despite what that critic wrote, kept turning the pages until she suddenly burst into tears.

“Someone died,” she said.

"This one," she said pointing to a character on the cover and, without stopping to lift her eyes, she continued reading and crying all the way to the end of the book.

Then, undaunted, she picked up the other book, and before long, I heard her laughing again.
But Chloe is not just a reader, she is also a prolific writer who can sit for hours writing page after page of whatever story she is working on. I don’t know why but during this last visit I came up with an idea.
“Chloe, you should write a story about a little girl who wears a red hoodie while visiting her grandmother.” 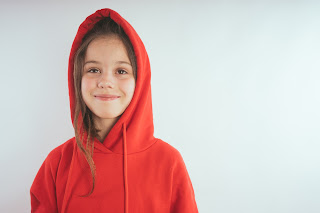 Amazed, Chloe looked at me. "That's what I am writing," she said. It's a modern version of Little Riding Hood."

I laughed and wondered who Chloe would choose as her villain. Would it be a wolf? Or would it be a virus?  Knowing Chloe, whatever she chooses, her story will be filled with magic and mystery and will show that happily "ever after" stories will be written and read forevermore.
.

Email ThisBlogThis!Share to TwitterShare to FacebookShare to Pinterest
Labels: #YoungReaders