I recently heard a song on the radio that came out when I was in my thirties, although as I listened, it seemed much older than that. It seemed like something that was around when I was in my teens. The song was Neil Sedaka’s Breaking Up is Hard to Do, and it had a kind of upbeat sound to it, when in fact breaking up is anything but upbeat.


The same is true of letting go, which is something I’ve been trying to do for a while now. But if there’s one thing I’ve learned from past experiences, it’s that letting go is a process, and one that involves not "unloving" but allowing.


I’ve learned, too, that once I’ve let go of something – or someone – I’ve felt much freer than I did when I was holding on so desperately. Letting go also means making room for something new because life is full of surprises. 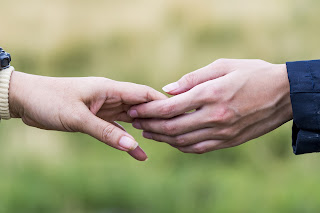 One of the things I’ve been using to help me get through this process is a poem I found on the Insight Timer app on my phone. It’s a poem presented as a meditation read by John Siddique and written by Rev. Safire Rose.


It’s titled She Let Go, and it goes like this:

Without a thought or a word, she let go.


No one was around when it happened. There was no applause or congratulations. No one thanked her or praised her. No one noticed a thing.


Like a leaf falling from a tree, she just let go...

There was no effort. There was no struggle. It wasn’t good, and it wasn’t bad. It was what it was, and it is just that. In the space of letting go, she let it all be. A small smile came over her face. A light breeze blew through her. And the sun and the moon shone forevermore.

My memoir, Dear Elvis, can be found at http://amzn.to/2uPSFtE.
Posted by Toni McCloe at 8:51 PM