I don't often see a movie and afterward, think of it as sweet. But that was exactly what the last movie I saw was. The movie, Stan and Ollie, was about the comedy team, Stan Laurel and Oliver Hardy (also known as “Babe”), who took their careers from vaudeville to silent films, and then to “talkies.” 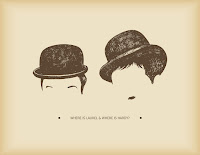 As a child, I didn’t see a lot of movies for reasons I discussed in my memoir, Rude Awakening. So, I didn’t see many of their routines, and when I did, I just didn’t “get” slapstick. But as I watched actors Steve Coogan and John C Reilly re-enact the routines of these two song and dance men, I finally “got” it, especially one routine that their manager called “magic.” As I watched it, I realized I was both holding my breath and enthralled.

But, what really worked between Laurel, who wrote most of the material for the act, and Hardy, who was his first and most enthusiastic supporter, was the friendship and love they shared.

As the movie ended, words appeared on the screen telling us about the death of Hardy in 1957, and about how, afterward, Laurel continued to write material for the act until his own death in 1965. Why would he do that? I wondered. I, who wrote an entire book about someone who died, wondered, Why would he do that? Why, indeed?

Dear Elvis, my story about love and loss written as a series of letters to Elvis, is available at amzn.to/2uPSFtE
Posted by Toni McCloe at 5:29 AM