Once Upon a Dream

I don't know how many of you frequent the Goodreads website, but I do and I decided that this year I would take their reading challenge and commit myself to reading fifty books, and I am happy to report that I am two books ahead of schedule, which amazes me because I am not a fast reader. I am also still re-reading my journals and although I am almost finished I still have the four or five I wrote this past year to complete. While reading, I found this rather strange entry under the date November 2, 2017 (which just happens to be All Souls Day).

"I woke up this morning and, with my eyes still closed, my first thought was of God and my second was about Don (a friend of mine who died three years earlier).

"When I think of Don I think of him as being in God's protective care. Not that I'm not, the difference being that I believe he can feel God's presence and that, even though I want to feel it, there is something between us, God and I, something resembling a  thick, heavy fog.

"Last night I dreamt that Cindi (my daughter) and I were going someplace. I was driving but I took a wrong turn and we wound up on an unfamiliar freeway. The dream changed and I was driving through the city I grew up in, Philadelphia. I thought I recognized where I was, but I wasn't sure. The place was crowded.

"Then the dream changed again. This time I was on a bus so crowded I decided to get off. Again I thought I knew where I was but then I wasn't sure because this place, too, was crowded with pedestrians the way New York City is. I started walking until I finally stopped to ask someone which section of the city we were in.

"She said she didn't know. Then, pointing ahead of her, she said, 'All I know is that North is this way.' I was happy then because I lived north of the city and I thought that if I just kept walking I would get home. 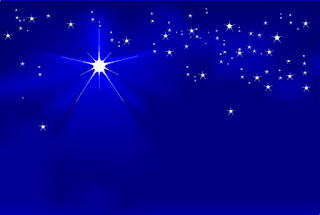 "And that's when I woke up and thought about God, and then about Don, and about another dream I once had, a dream I never forgot because that night I dreamt that I died and went to heaven. When I got there I looked around and said, 'So this is where heaven is. I've passed this place a million times and never even noticed it.'

"So maybe that's where heaven is. Someplace near. Someplace just north of here."

And as a postscript:

I started writing this post yesterday and finished working on it this morning. I remember looking at the time when I finished. It was 8:23 a.m. An hour later I learned that my mother-in-law, who taught me tenacity - even if I did learn it late - died this morning at 8:23.

I would like to honor her here with this picture my daughter Cindi drew of her on Wednesday and finished on Thursday: 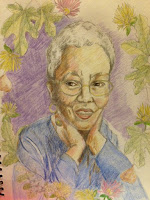