We made it. My daughter, her husband, their children and I have reached the Outer Banks of North Carolina. Right now, I am sitting inside a screened-in porch, just inches from the Atlantic Ocean, listening to the surf and sipping hot coffee from a mug.

As you know, I have been writing a memoir, Rude Awakening, and have reached the point where I met Nathan - Nathan being the fictitious name I have given him. I have been trying for weeks now to remember the way he was when we met, back in 1964.

It doesn't seem to matter how old he’s gotten or how old I’ve gotten because the sight of him always propels me back to the way he was, to the way we both were during the early days, the days right after we met, right after we married. And although I’ve been propelled back with feelings, the memories themselves evade me. 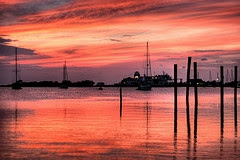 Yesterday was the perfect beginning here as I awoke to a day breaking into spectacular colors.  The sun rose up out of the ocean like a gigantic, glowing peach, reflecting itself onto the waters below. Then it slipped behind the clouds only to re-emerge as a shimmering, golden ball of light illuminating an icy blue expanse of water. In the afternoon, I watched from the beach as dolphins jumped playfully in and out of the water.

Today there is a mist over the ocean. Sky and sea seem indivisible until I look slightly to my right where the waves crest and tumble forward, erupting and transforming themselves into tiny bubbles of joy. I look at the ocean and close my eyes to drink in the moment, acutely aware that all of this will end soon. But before it does, I want to breathe it all in deeply – into the depths of my soul where one solitary light still burns. If nothing else, I want these pages to bear witness to that light as it grows back into the fires that once lit the entire length and breadth and depth of my being.

Last night I was awakened suddenly at two in the morning by a storm with sudden streaks of lightning that spilt the sky in two and by loud bursts of thunder that continued, unabated, for more than an hour.

Now as I sit here staring into space, a breeze brings my attention back to the ocean where the wind gently whips the water’s surface making the waves rush in concert passed the point where my vision was lost. I notice the glistening surface of the water where it is illuminated and made vibrant by the rays of the sun. I notice the breadth of the ocean and catch my own breath knowing its depth.

A few feet to my right and a few feet to my left, the ocean seems to blend into the sky. But directly in front of me, there is a thin vibrant strip of light at the exact spot where they meet. I reach for the binoculars I brought along to watch the dolphins, to make sure this strip of light, which is as bright as quicksilver, is real and not just a figment of my imagination, and as I search the points where it begins and ends, it slowly disappears.
And as I write, I become acutely aware that the sun and the sea and the sky have become metaphors for the things I no longer remember and for a past that exists no longer except, perhaps, along the outer banks of my mind.

My memoir, Dear Elvis, is available at amzn.to/2uPSFtE
Posted by Toni McCloe at 10:38 AM