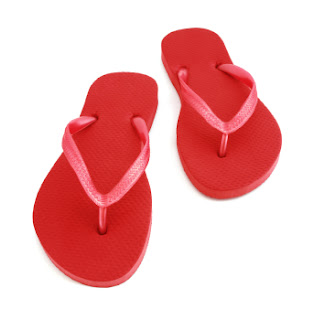 Did you know that flip-flops have been around since 4000 BC?  (Weren’t they the footwear of choice those decadent Romans wore with their togas?) Did you know that soldiers returning from Japan brought modern flip-flops to this country? That was in the 1940’s, but flip-flops didn’t become popular here until the 1960’s. (That’s because nobody in their right mind would have worn them in the Forties and Fifties. Flip-flops are casual wear and nobody understood casual before 1964 when the Beatles grew their hair long just for the hell of it.)


Did you know any of this?  Of course, you didn’t and neither did I. In addition, I just didn’t give a damn. Until recently, I was too blissfully content in my ignorance. Having grown up in the Fifties, I had never even worn a pair of flip-flops.

Then along came that June day when both my daughter and I finished working at our respective school districts. It was a beautiful summer day - one of those glorious days when it was hot, but not humid. There we were with our first full day of freedom.

Naturally, we decided to spend the day doing absolutely nothing - with a little bit of shopping thrown in for fun. We had just left one store in the mall when my daughter, upon seeing a pair of flip-flops in another store window, exclaimed, “Let’s get pedicures!”

“Because it’s summer and you need a pedicure to go with your flip-flops.”

“But you need them to wear while you get your pedicure?”

“What?” but she was already sailing through the front door of the shoe store, expecting me to follow.

“Mom, look at these she said pointing to a pair of hot pink flip-flops with soles thicker than the ones on my sneakers.  “Try these on.”
“I can’t,” I said.  “I only wore flip-flops once and that little do-dad thing in the middle drove me nuts.”

“But you need them,” she insisted.  “Besides this pair won’t hurt.  They’re good ones.”

“How much are these?” I asked a salesman thinking maybe I could squeeze out a ten dollar bill for them.

“Dollars?” I shouted wondering how something that almost did not even exist could cost so much.  Everyone in the store had turned to look at me as half a dozen emotions including shock, incredulity, and amazement appeared on my face.  Embarrassed, I turned to join my daughter who had already broken into gales of uncontrollable laughter that propelled both of us out of the store, into our car and up the highway to a discount department store.

But after purchasing an inexpensive and bland pair of flip-flops and getting a pedicure, my mind kept returning to the sixty dollar pair that would have looked perfect with my hot pink, perfectly painted toenails.

“Hmmm….” I said looking down and wiggling my toes, “maybe those Romans weren’t so decadent after all!” 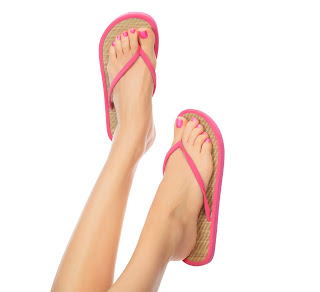 My memoir, Dear Elvis, is available at amzn.to/2uPSFtE
Posted by Toni McCloe at 10:30 AM