Still Driving After All These Years 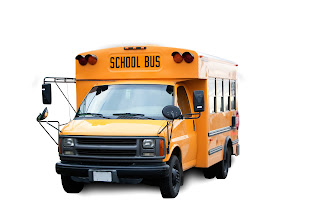 Back in the late '90's I was living in the mother-in-law suite of my youngest daughter's house. While I lived downstairs, Jessi lived upstairs with her husband and four kids. I had been living there ever since I called her one day and told her how much I hated the job I had, working at a bank.

“Quit,” she said, “and come live with us Instead of working, you can do all the cooking.”

“You really don’t have to worry about that,” she said. “You just have to drive the front of the bus. The back always follows the front.”

I laughed at that and told her again she was crazy. But, after thinking about it, I decided to try. And right away I loved it. I loved the hours- the early mornings and late afternoons and having the rest of the day to myself. I loved listening to the sound of children’s voices and sitting up high with the big boys. I also loved the benefits.

But after twelve years - by which time I was 72, I decided to retire. I put in the paperwork, then changed my mind. Luckily, I was able to find another job in another district. I’ll only work for a year or two, I thought back then.

I just finished my ninth year there. This time I fell in love with my co-workers – all of them. But sometime in the middle of those nine years, I moved with my daughter and son-in law to a house twenty-five miles away, and lately that distance has been getting to me. Not to mention the increase in the price of gas.

Now, I’ve found a job driving for a district whose bus garage is only nine minutes from my home and I’m going to work for a year.

Email ThisBlogThis!Share to TwitterShare to FacebookShare to Pinterest
Labels: #schoolbus