The Water Dancer, A Review 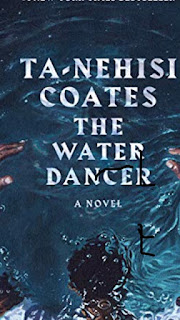 "Trauma erases memory,” our instructor said during our most recent zoomed Literature/Discussion Class. The book we were discussing was The Water Dancer by Ta-Nahisi Coates who is also the author of the memoir Between the World and Me and of a Marvel Black Panther comic book series.

The Water Dancer, Coates’ first novel, is the story of a slave named Hiram Walker, who was born on a tobacco plantation called Lockless in antebellum Virginia. But Hiram is, as one critic put it, no ordinary slave. Let me rephrase that. Hiram is no ordinary human being but is, instead, a boy who can listen to others speak and transform their words into " pictures, chains of colors, lines, textures, and shapes” and can then translate them back into the exact words with which they had been spoken. Hiram has the gift of perfect memory. The only thing Hiram cannot remember is his mother who was taken from him at an early age when his father, the white master of Lockless, sent her out “Natchez way,” putting her on an auction block to be sold.

When Hiram’s incredible gift of memory is brought to his father’s attention, the boy is taken from the fields and instilled in the house as his half-brother’s slave until a cold and rainy night, when the brothers are traveling by carriage over a bridge and an unfortunate accident occurs. Both boys are pitched into the ice-cold river below. Hiram, and only Hiram, survives and is able to survive because at a moment just before impact, he is given an image of his mother, an image that is surrounded by a blue light that leads him to safety.

Hiram realizes the blue light came from somewhere inside himself and that his ability to “conduct” himself to safety is another valuable gift, but not one he is able to understand or control. He also knows that the memory of his mother is fleeting and is once again gone.

It is not until after Hiram has undergone a series of horrendous events, not until after he runs away, reaches Philadelphia, and becomes an agent of the underground railroad, that he returns to Lockless and finds, among his father’s possessions, a necklace that belonged to his mother.

And, with this, Coates shows us how, although trauma erases memory, a single object – a necklace, a hairbrush, a vehicle, or even an intersection, can trigger memory, can transport and connect us to an individual who was lost to us. And, finally, if what Coates wrote in the novel is true - that “to forget is to truly slave,” then to remember is to be truly free.

My memoir, Dear Elvis, can be found at http://amzn.to/2uPSFtE.
Posted by Toni McCloe at 8:41 AM