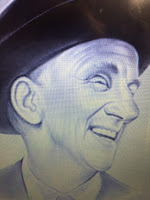 You may not know his name, but you would probably recognize his voice if you heard it.

Born in Brooklyn on February 10 in 1893, Jimmy Durante was an actor, singer, comedian, writer, and Jazz pianist who began his career in vaudeville in the 1930s, appeared with Buster Keaton in silent comedies, and starred in his own radio show. But it wasn't until 1954 when he got his own television show that he came to my attention.

If you are young, you know Durante’s gravelly voice as the narrator and singer of “Frosty the Snowman.” In The Notebook he can be heard singing the immortal “I’ll Be Seeing You,” and if you are a more recent movie-goer, you have probably heard him singing the classic “Smile” in the 2019 movie and trailer for Joker.

But what I remember most about Jimmy Durante was the way he ended his weekly television show. Standing at the stage door, Durante would put on his coat and hat, turn to his audience and say, "Goodnight, Folks. And good night, Mrs. Calabash, wherever you are.”

No one knew who Mrs. Calabash was. For years people, including me, guessed at her identity. It wasn’t until 1967 when Durante revealed that “Mrs. Calabash” was a pet name for his first wife, Jeanne, who died suddenly on Valentine’s day in 1943.

Now, if you're wondering why I am writing about this man, it is because I want to imitate him, just once, with this:

Be well, my great, good friend, wherever you are.

Email ThisBlogThis!Share to TwitterShare to FacebookShare to Pinterest
Labels: #MyFunnyValentine