It’s amazing, I think, how adding the smallest of details to a story can put so much pleasure into the reading of it. Like in the book I’m reading now -  the way it details, not just what thoughts a character is thinking, but what he’s doing while thinking them. Like the order in which he puts on his clothes early in the morning - or rather in the middle of the night after receiving an emergency phone call - reaching first for his socks, his “drawers,” his undershirt, and his trousers.

Then, after pulling up his suspenders, he decides he wants to add a clean shirt - that he likes the way he settles the deep tails of his shirt into his trousers and, how for some reason doing this makes him feel particularly masculine. And how, after deciding to shave, he thought about shaving as something that took a good deal of time, “not because he enjoyed it (he loathed it),” which is something I've always suspected men dislike doing.

The book I’ve just started reading is James Agee’s A Death in the Family. It’s a book I had heard of before but never read, and only picked up after hearing the Baltimore Symphony conductor, Marin Alsop, telling Scott Simon on NPR’s Weekend Edition about a piece of music called "Knoxville, The Summer of 1915," the lyrics to which are taken from the beginning of Agee’s book. 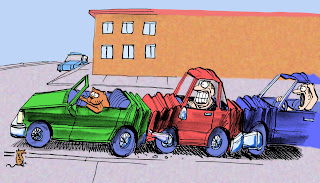 happened only because I was driving somewhere I did not belong.

But it was a lesson, I think, about the way serendipity works - how, but for an unfortunate accident, I would never have been introduced to a book that is giving me hours of pleasure (exactly 8 hours and 4 minutes according to my Kindle), and insight into what makes a story work.

My memoir, Dear Elvis, can be found at http://amzn.to/2uPSFtE.
Posted by Toni McCloe at 5:40 AM