As most of you know, I am the author of two memoirs. Lately, however, I have been trying (Do put the emphasis on “trying!”) to write a novel. In order to facilitate this endeavor, I began working with a Gotham Writers’ Workshop book called Writing Fiction. I have been reading all the lessons and doing all the exercises and doing rather well I thought until I got to the following prompt:

“Return to the character you created in the previous exercise, the one with the seemingly perfect life. Now write an entire story centering around the major dramatic question you created. Your story should have a beginning, a middle with escalating conflict, and an ending that includes crisis, climax and consequences. One more thing. This story can be no longer than five hundred words.”

What? Are you kidding me?

I was totally stumped. How was I going to transform my character, whose name was either Annie or Lily, who did not have a perfect life, who was a lonely waitress living in a lonely town, into a complete story of fewer than five hundred words?

Fortunately for me, I was doing that exercise at my daughter Cindi’s house. I was sitting at her kitchen table; my twelve-year-old granddaughter was sitting across from me. After I explained my predicament to her, Chloe, who is a prolific writer herself, said, “Whenever I feel like that, I write a story about animals.” 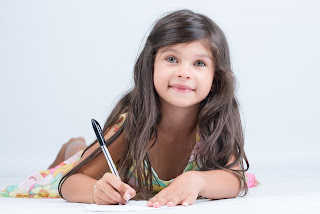 Of course, I scoffed at that until finally, getting nowhere with my waitress, I decided to take Chloe’s suggestion. The result became a story about Lily, a sweet little deer who lived in the forest. Lily was lonely and wanted to make friends with other deer, but she didn’t know how to begin. In addition, she lived in a portion of the forest uninhabited by all other animals. So, Lily decided to go out on a limb - so to speak.

It was the middle of November. Lily knew that because all the leaves on all the trees surrounding her had turned to gold and were trembling as they fell from their branches. Lily took a deep breath and started moving. It wasn’t long however before something loud and swift swept passed her ears. Lily looked up and saw a two-legged creature dressed in bright orange clothing moving toward her. This creature, Lily saw, was carrying something long that looked like a branch, but wasn’t. Lily didn’t know what it was. She knew only that she had to get away quickly.

Lily started running. She ran for miles and miles until finally, out of breath and tired, she came to the end of the forest. The path in front of her was flat and smooth, but not very wide and Lily believed she could make it across this path and into the forest on the other side if she ran as fast as she could. 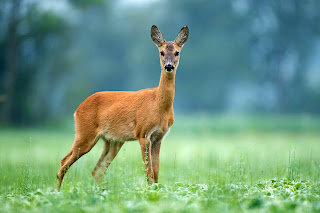 Lily stepped onto the path just as a large lumbering object with four round legs came barreling toward her. The object came to a screeching halt. Lily stopped too and looked into its shining bright eyes that were bigger than Lily’s head. Lily didn’t stop to think. She didn’t stop to wonder what this thing was. She just started running faster than she had ever run before until she reached the point where another forest began, where more creatures in orange clothing were looking for her, and where she continued to run for her life until finally, she came upon a herd of deer who beckoned her and welcomed her as though they knew her although she had never seen any of them before. Lily moved shyly toward them. The strange deer formed a circle around Lily, moving closer as though to embrace her. Slowly, Lily began to make friends with the other deer who silently and wholeheartedly led her to safety.

My memoir, Dear Elvis, can be found at http://amzn.to/2uPSFtE.