A man is at work chopping down a tree. After the tree falls, he looks up at the other trees still standing. He looks at their leaves dancing in the breeze and beyond them at the boundless sky. He takes a deep breath and enjoys the sense of freedom he feels. But only for a moment because in the next moment he is surrounded by men with guns drawn, cocked and pointed at him.

The above is a scene from the movie Just Mercy which is taken from a memoir by Bryan Stevenson, who as a young attorney moved to Alabama “to give hope to men on death row.” The movie focuses on the story of Walter McMillan who was unjustly accused of murder and placed on death row even before his trial began.

But McMillan’s story is only one of many stories Stevenson writes about in his memoir. He writes, too, about a case I found to be as egregious as McMillan’s. It’s a story about  a man named Joe Sullivan.

Stevenson became aware of Sullivan when another inmate wrote to him describing Joe as “disabled, horribly treated, and wrongfully condemned” to life in prison for a non-homicide crime he was accused of committing when he was 13. 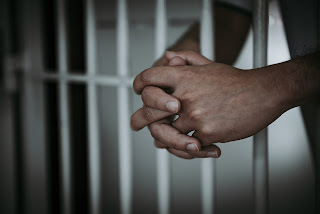 When Stevenson wrote to Sullivan telling him he was looking into his conviction, Joe wrote back saying, “If I didn’t do anything, shouldn’t I be able to go home now? Mr. Bryan, if this is true, can you please write me back and come and get me.” Joe was 31 when he wrote that letter and had been in prison for 18 years.

While watching Just Mercy, I found myself thinking about the Pledge of Allegiance I had memorized as a child: Does it really say what I think it does? Does it really say I pledge allegiance to the flag of the United States of America and to the republic for which it stands, one nation under God, with liberty and justice for all?

After looking it up, I assured myself that it did, and that inherent in those words there is a reciprocal promise my country gives to me to grant me justice, even in the event that I am accused of a crime.

And what about mercy?

When one of his clients is denied a stay of execution and is put to death, Stevenson is ready to quit and to give up his practice until he is suddenly given insight into the quality of mercy. What Stevenson writes about mercy is alone a good reason to read this remarkable book.