I left work at my usual time on Thursday but decided to stop first to do a little shopping and to get that bowl of cabbage beet borscht I’d been craving. So it was dark by the time I got back on the road.

I was driving along Route 73, behind the usual line of cars, just a mile or two before reaching Skippack Village when, from the corner of my eye, I saw a deer lying on the grass. Another deer was hovering above him, moving from one side of him to the other, touching his nose to the fallen deer as though he were encouraging him to get up. I wondered later if either deer ever recovered, which didn’t seem entirely impossible. Not after what I saw in November, a year ago. 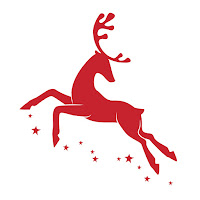 I was in my school bus that time. It was early afternoon and I was driving down Valley Road when I saw a deer run out of the woods and get hit by a car two vehicles in front of me. I watched as the deer dropped to his knees and slid all the way across the highway where he stood up and ran away.

Anyway, it’s November and, I’m told, mating season for deer who aren’t thinking about anything else so I try to be more careful than usual. But as I drove home that night, I couldn’t help wondering why Santa’s deer can fly but ours can’t. Maybe my son-in-law will know. He’s a magician, you know, and he just might know what secret Santa uses to make reindeer fly!

My memoir, Dear Elvis, a story about grief and loss can be found at amzn.to/2uPSFtE
Posted by Toni McCloe at 6:23 AM