I am not a “dog person.”  I never was, but in recent months my feelings have been shifting. I’m not sure why, but right now I'd like to tell you three stories, each seemingly unrelated, except that each one is about an experience I have had with a dog.

1) A long time ago – it was 1976 to be exact – when I was recently separated and living with my children in Pennsauken, New Jersey, I had no car but managed to find a job I could walk to. In order to get there, however, I had to cross Route 38, a six-lane highway. 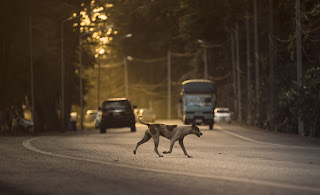 One day while I was walking to work I realized a dog was following me. I didn’t know why he was following me, but despite my efforts, I couldn’t shake him. When I reached the intersection I had to cross, I stopped (and the dog did too). I noticed the light was red, but there was no traffic and I knew I could make it to the center where I would wait on the small island for the light to turn green. When I got to the island, I stopped, but this time the dog did not. Instead, he stepped off the island and into oncoming traffic. 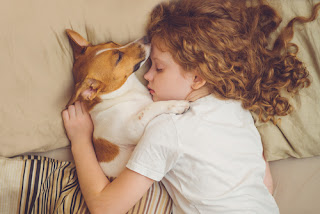 2) One of the last things I posted on this blog was a story about my sister who, after she became a widow, went to a shelter to adopt a dog. Whenever I went to visit her, I’d try to stand back, but the dog would inevitably jump up onto the sofa and into my lap. On one occasion, after I shifted to avoid him, my sister noticed and said, “Hey! Don’t treat my dog that way!” When I retorted that his halitosis was enough to kill, she laughed and pushed him toward me. Later as my sister lay dying, that dog laid in bed beside her, comforting and protecting her. I don’t know how, but he knew she was dying long before I did.

3) Late one Saturday morning back in January, I had a dream in which I was walking along what felt like the milky way. Except for what seemed like a thousand stars, I was surrounded by nothing but darkness. As I walked, I realized there was a dog walking beside me, sometimes running ahead of me, and then coming back again to walk by my side. Eventually, we came to a door. I knocked and when the door opened a friend of mine who died four years ago was standing there.

“Is this your dog?" I asked him even though in life he, like me, was not a dog person either.

He laughed. “No,” he said, “but he likes to come here at night to sleep with me.”

"Really?" I thought as I woke up and, even with my eyes closed, felt the daylight forcing itself into my room from behind the blinds. I stayed in bed with my eyes closed for a while longer that morning. And then, thinking about my sister, my friend, and the animals who seem always to be moving so far ahead of me, I cried.

And now that I've told you those stories I think I know why. You see, until now I've never told that story to anyone - the one about the dog who died in traffic that day and now that I have - well, telling it won't bring him back. Nothing will. But right now I'd like to imagine that he was the same dog who was following me in my dream that morning and that both my sister and my friend are taking turns taking care of him in heaven.