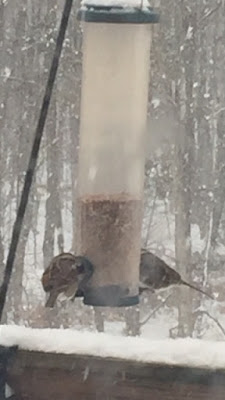 My friend, who has never experienced snow, is a Catholic priest studying Canon and civil law in Rome. He is originally from Malawi, the country called the heart of Africa because its people are so warm and friendly. Kondwani, who told me to call him Kond - because that’s what all his friends call him, certainly is. He and I have been texting back and forth for almost a year now and I have promised myself we will meet in person as soon as his studies are done.

But in Africa, and not in Italy because when I spent six weeks in Italy back in the early ’80s, visiting the tiny town where my father was raised, I understood not a word that was spoken to me. (Believe me, there is no point in speaking more loudly or enunciating more clearly!) Instead of interacting, I used to enjoy going to a nearby beach on the Adriatic Sea where one day when I was midway between sleeping and listening to the waves, I heard a dog barking and thought: That’s the first thing I‘ve understood since I got here.

While my knowledge of Italian is restricted to one or two words, Kond, who is one of the most intelligent persons I’ve – well, never met, is taking all his classes in Italian - even though his native language is English. The only words I know in Italian are “arrivederci” and something my parents used to say whenever they were upset with someone. I used to wonder what ‘a mitigon” meant until one day when I realized what my parents were saying when they threw their hands up in disgust was not "a mitigon," but  "American!"

Well, my friends, I am going to watch all the snow falling again outside my window. Arrivederci and may it be soon!

My memoir, Dear Elvis, can be found at http://amzn.to/2uPSFtE.
Posted by Toni McCloe at 7:58 AM