The Power of Touch

I was talking to my friend Fred again. He was telling me how he used to work at a school for boys and how he had to be trained in the correct way to restrain them.

“Restrain them?” I asked. “Why do they have to be restrained?”

“Because they often act out,” he responded. Then he told me that there is a proper way to restrain a child that involves four people who gently, but firmly hold him down, one holding his right arm; another, his left; a third, his right leg; and the fourth, his left.

“But why would a child act out when he knows he'll be held down?" I asked. 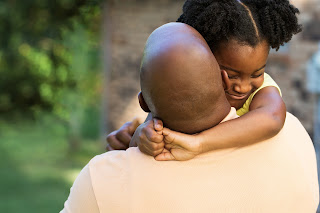 So, maybe the next time you hug a child who needs reassurance or love or just to know that you are there for him, you’ll remember that it doesn’t matter if you embrace, cuddle, squeeze, clasp, clutch, or cradle that child. Maybe you’ll just hold that child close and not be surprised when he - or she - hugs you back.


My memoir, Dear Elvis, a story about grief and loss can be found at amzn.to/2uPSFtE
Posted by Toni McCloe at 7:21 PM